STRATONAV (STRATOspheric NAVigation) is a scientific project which aims to test the VOR (VHF Omnidirectional Range) navigation system and to evaluate its accuracy above its estimated service volume. This investigation could determine a possible operational range extension to future stratospherical aviation.

The experiment has been selected for the REXUS/BEXUS programme 09 cycle and it will fly on the BEXUS stratospheric balloon in October 2016 from the SSC Esrange Space Center in Kiruna, Sweden.

The VOR (VHF Omnidirectional Range) is an aircraft navigation system that convoys the old concept of sea mark navigation into radio frequencies. It has been used since late ’40s and there are over 3000 VOR ground stations all over the world.

Each VOR ground station transmits a complex signal (in VHF band), with the ID of the ground station, a reference signal indicating the magnetic North and a directional sine wave, changing its phase towards the transmitting direction. 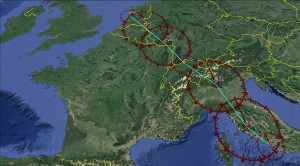 The VOR has been used for decades as primary flight navigation system: the pilot only had to divide his optimal route into straight segments among VOR ground stations and to follow the sequence of radials while tuning his onboard radio to the ground stations’ frequencies.

We know that an high altitude navigation VOR station has to be able to serve civil planes cruising at high altitude (10-12 km). The VOR service should be guaranteed until 18 km in height. 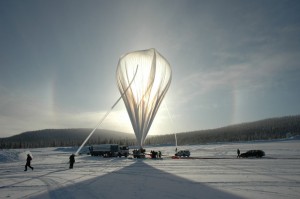 We aim to test some VOR receivers in the stratosphere, flying on the BEXUS balloon until 25-28 km of height and to check the functionality and accuracy of the VOR system from the ground to the stratosphere. The launch area (Kiruna, Sweden, 150 km above the Arctic Circle) is served by a lot of VOR ground stations and the BEXUS flight could signify an unique chance to discover the real service volume end of the VOR.

We will collect the receivers’ VOR data and compare it to the GPS ground track of the balloon. If we are able to compute the balloon’s radial and position within an acceptable precision, we could set a milestone for future stratospheric flight navigation systems.